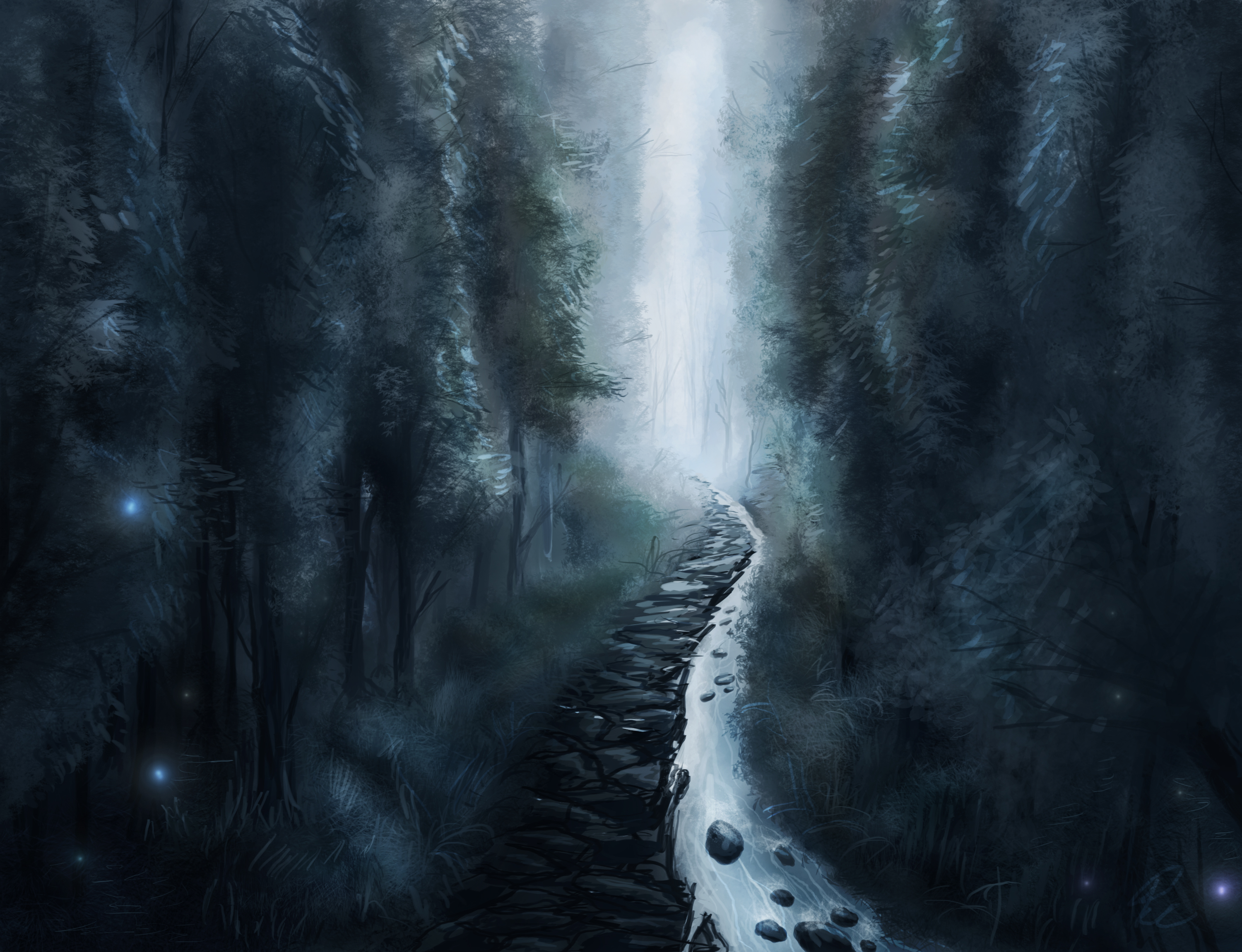 “When Hope’s last light fades the word shall be known, Darkness will return to Darkness and the three will become one, only then can the Other be banished from whence it came and with its loss the light of the people shall perish.” – prophecy discovered by Zarghul the Observant, High Priest of The Outsider

Welcome to Forbidden Empire, the second campaign in the Wrath of the Fallen Goddess trilogy. This campaign will primarily be taking place in the Darklands approximately four years after the events of the first game. Our players will be adventuring as Durnskald, questing to uncover the truth of The Rite of Severing, as well as the shrouded origin’s of A’ki and the link to the Goddess of Corruption Xax.

A song of longing and loss is carried on the winds of the moors of Gehenna Ur. Durnskald mothers and fathers feel a cold longing in their hearts for the lives they once knew, as resentment, bitterness, and sorrow well within their very cores. In the wake of Sin’Rothos’ betrayal of Whisper May’Fevr at the bidding of A’ki, the light of the Durnskald people has nearly been extinguished by the brutalities of a civil war between the Traditionalists and the rebelling Provisional Government. Gehenna Ur trembles under the near constant threat of Traditionalist invasion. Meanwhile the oppression of the “Stonehearts”, members of the serf caste, continues in Gehenna and even in pockets of Gehenna Ur despite being outlawed. Hope has all but died out in the villages, unspeakable horrors lurk in the Archims and moors, while the specter of loss and war looms constantly.

News:
5/19/2021 – Created the Durnskald Bloodlines page, though I still need to get the illustrations added.

5/3/2021 – Still here, still working on things. Haven’t had nearly as much time as I used to to devote to things so progress here has been unbearably slow. Updated the RP Points page extensively, added art to the Oster’toth page, added a new menace to the Dangers of the Darklands page, and created the Xax page for the Goddess of Corruption and Decay. Also updated the landing page art and description AND embedded a Finnish folk song called Saattomarssi by Hanni Autere that is not only hauntingly beautiful but which I think matches exactly the feel that I’m going for with this game; sorrowful yet marching steadily towards something larger and more final.

Whether that something is something good or something awful I’ll leave for you to decide for yourselves.

4/13/19 – Did a lot of work on the Runic system, solidifying it into something tangible and workable. Is it balanced? Probably not.

4/19/18 – The current status of this game is that the campaign is in planning. The wiki is being built, the site is being constructed, quite a lot still left to do. If I had to hazard a guess, this game will be ready to start perhaps sometime next year. 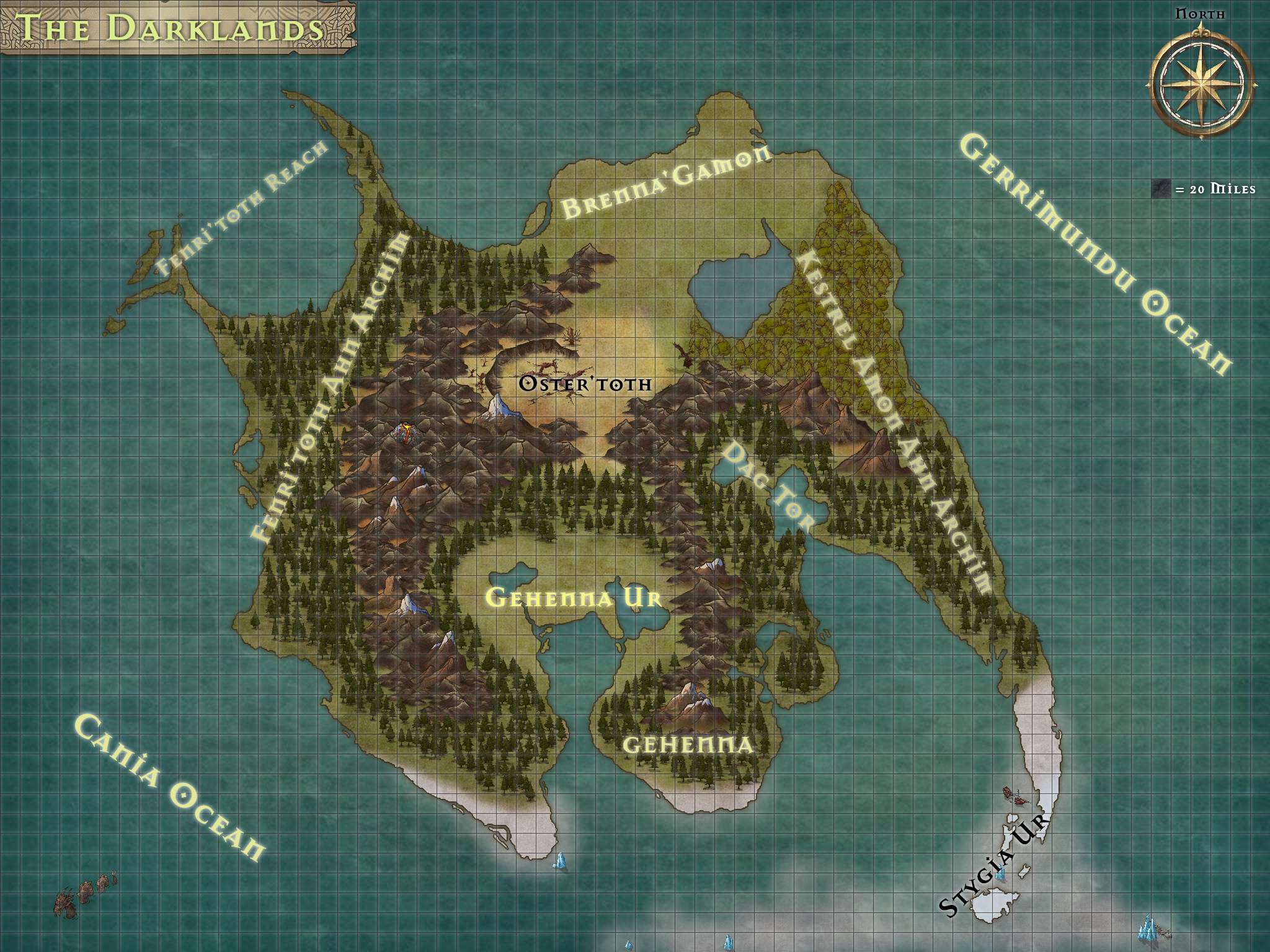 Excerpt from the advanced text “Azca Et’Zeryx Valt: Roth Ulman” detailing the nature of how Azca pertains to the interactions of planar physics.

“Azca is a powerful force that shouldn’t be trifled with by the untrained. Under certain circumstances and with the correct foci one could inadvertently cause certain unintended interactions affecting the stability of the plane. These interactions can be extremely difficult to anticipate and the consequences can be dire, occasionally qualifying as apocalyptic. Therefore take the following warnings to heart:

Let’s get right to it then. As I’m sure you are already aware planes consist of several layers which are bound to each other by elementary forces. Azca can be used to weaken or strengthen these elementary forces using the following principle:

Used with the theories presented in Azca Et’Zeryx Alumud: C’et Vastrl (Volumes One, Two, and Three) it should be readily apparent that even the smallest change may have a much larger impact than initially predicted. This effect is even more pronounced when extended over a duration of time. Standing point foci should be avoided for this reason, the Azca Potential generally continues to grow for as long as the foci is present. The exception to that would be if the foci itself was inside of a containment field (as it should be). The containment field should severely dampen the amplification effect of the foci (which is the original intended purpose of a stasis wave-fluctuation based containment field after all), nearly cancelling out the amplification entirely. This allows you to extend the duration of your interaction dramatically.

Take note though. Obviously the amplification cannot be entirely nullified, to do so would render the foci pointless. Given that information a foci securely contained within a stasis wave-fluctuation based containment field must still steadily amplify the Azca Potential. If left unchecked eventually one of two things is accepted to happen; either the plane is bled dry of Azca entirely (leading to mass extinction), or the foci will fail catastrophically (in which case I sincerely hope that your containment field is very strong).

Azca scholars aren’t entirely sure what happens should the containment field fail. Obviously the accrued Azca would breach the field, that much can go unsaid, but what effect would manifest from such a breach is most unpredictable. The best case scenario is that a conduit with the astral plane is formed, acting as an enormous vent for the energy. The cataclysmic Azca backlash that devastated the plane of Athas might be considered a worst case scenario by some, I feel that the denizens of Athas may have gotten off lucky considering the circumstances.

Excerpt from the advanced text “Azca Et’Zeryx Valt: Roth Ulman” detailing the nature of reality and how Azca pertains to the formulation of the Planes.

“The most important factor to understand is that the nature of the Planes is not immutable. The power of the Azca is woven in with the very fabric of reality, therefore it stands to reason (and has been proven) that by purposeful manipulation of the Azca contained within one may affect the very weft that binds creation. Be forewarned, it is no easy task to pull loose a thread to affect such a change, which doesn’t bode well for the confoundingly more difficult task to add even a single thread to an already established (and thus static) weave. Contained within this tome is a set of formula that in theory may be used (in the correct place and pocket of time) to add a thread forged of pure Azca to the weave of reality provided that one has the proper equipment for creating the required event Foci.

By the very laws which govern the use of Azca (ref Azca Et’Zeryx Alumud: C’et Vastrl – Volume Two) the creation of the required Foci would in effect nullify any present weave in accordance with Talon’s Theory of Planar String. Such a change has, when attempted, proven disastrous in the past (see any of the available texts in regards to the destruction of Athas for one memorable example). Remember, that is the best case scenario should the attempt fail. I have heard far worse theories explaining what happens if the attempt succeeds. There are blank pages in our history books that we think may be related to one such attempt, in this case the people who attempted it are thought to have been erased entirely from reality as if they had never existed in the first place.

That theory actually has its own set of interesting implications. Consider for a moment a man who via the assistance of a temporal wave-form anomaly (such as that generated as the backlash from a failed Time Stop arcanostruct) is placed in his own recent past, where he manages to cause the death of his past self in some irrelevant fashion. This creates a problem, if he is now dead in the past he isn’t there (as he doesn’t exist) in the future to be affected by the anomaly, which would mean that his current self can’t travel to the past to cause the death of his past self. This in turn means that since he couldn’t have killed himself in the past he is still present in the current, to be affected by the anomaly and starting the paradoxical cycle anew.

I bring this up because the peoples who attempted (and in theory succeeded) to add a thread to the weft of reality couldn’t have just disappeared. We know this because we know that moving backwards along a temporal line is possible. If the attempt rendered them completely non-existent then the theory goes that they wouldn’t have existed in the past to erase themselves. Cases like this are interesting because of what they imply. It is my thinking that they weren’t erased from reality but simply removed from our temporal line. Maybe this placed them on a different or new temporal line. If there is only a single temporal line that all of reality shares this means that these people removed themselves from time entirely. What happened to them then? No one can say with any real sense of authority.

Back to the topic at hand. The theoretical Foci must be aligned along massive wells of Azca in order to allow the insertion of the thread. The Foci would have to be constructed out of some kind of amplifying element, without it the Foci would simply bleed the plane of Azca before enough power could be gathered to force open the weave. Several such amplifying Foci would be required and they would tend to be highly unstable locations due to the energies involved without some sort of power-damping on a massive scale. This is part of the reason why such Foci are thought to be impossible, how does one create a structure that is both highly amplifying and highly dampening simultaneously? The theory is sound at any rate."