Dangers of the Darklands 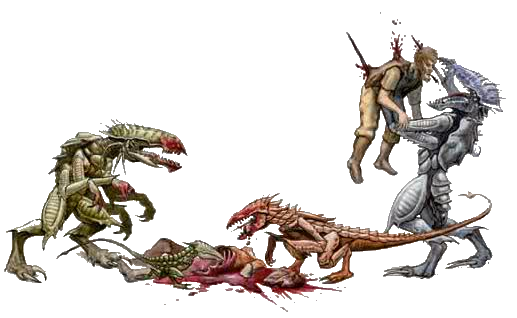 Inhabiting mainly the forests and swamps, Kythons come in several delightfully dangerous and vividly colored varieties with each type corresponding to a stage in their growth. Most Kython are fairly intelligent, as such the older Kython are the apex predators of the Darklands. When young they are generally dark green scaled lizardlike bipeds with scythe-like arms, growing to roughly the size of a small sized dog and vaguely insectoid in appearance. As they age they get bigger, they become more intelligent, their coloration becomes multi-hued and brighter, and their claws become more like hands. Older specimens up to fifteen feet tall have been sighted (and fled from). Kythons pose a formidable threat to all Durnskald and are probably considered the main reason the Durnskald generally don’t travel or explore much. 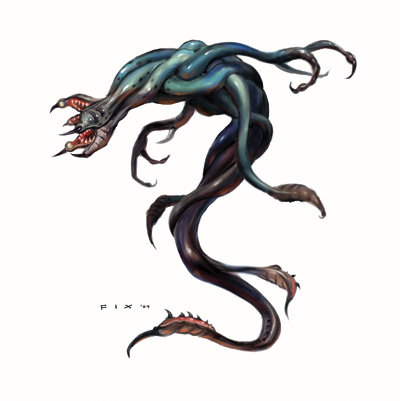 Vile parasites with a thirst for destruction, the Arevox are rightly feared by the Durnskald, though other races would refer to them as the Tsochar. All it takes is for a single worm-like strand to make its way into a host body, from there it will slowly consume the host from the inside out while manipulating them into exposing themselves to more Arevox. If the strand should manage to succeed in finding another Arevox strand it will breed within the host, ultimately bursting forth from their corpse along with their mate and dozens of offspring, ready to start the cycle anew. Their first appearance was recorded shortly after the Sundering., though legend has it that the Arevox weren’t always the insidious predators that they are now. Make no mistake, a single pair of breeding Arevox can wipe out an entire settlement in short order. Arevox are found in the deepest reaches of the swamps and wetlands. 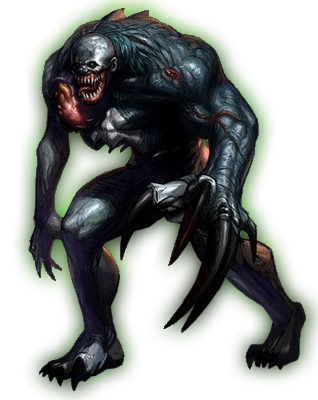 Terrifying brutes and hurlers of fire the Reborn are said to be what becomes of the Durnskald serf caste should they disobey their masters. Hulking beasts of Durnskald that once were, the reborn are little more than mindless revenants with a primal hunger to consume the flesh of the living as their only remaining drive. As part of their training the Fateweaver caste are known to take captives of the Reborn and to bend their wills to that of subservience. It’s not entirely clear if the Reborn are actually dead or not, and the more powerful varieties are known to be able to reform from smoke or shadow and glow softly with a pale green fire. Most troubling perhaps is the reports from the wardens of Aostara Ahn Archim, whispered reports of Reborn with the white skin and black eyes of the Champion caste. The Reborn can be found anywhere in the Darklands but the highest concentration of them is thought to be in the howling wasteland of the Hester Expanse.

Dangers of the Darklands